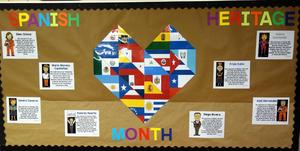 The beautiful board on this page was compiled by Ms. Edith Gonzalez, the administrative assistant at Varnett's Early Childhood Center. Click here to read the individual profiles on the board!  (Click on image to enlarge.)
Hispanic Heritage Month begins on September 15, the anniversary of independence for five Latin American countries—Costa Rica, El Salvador, Guatemala, Honduras, and Nicaragua. In addition, Mexico declared its independence on September 16, and Chile on September 18.
The term Hispanic or Latino, as defined by the U.S. Census Bureau, refers to Puerto Rican, South or Central American, or other Spanish culture or origin regardless of race. On the 2010 Census form, people of Spanish/Hispanic/Latino origin could identify themselves as Mexican, Mexican American, Chicano, Puerto Rican, Cuban, or "another Hispanic, Latino, or Spanish origin." According to the 2010 Census, 50.5 million people or 16% of the population are of Hispanic or Latino origin. This represents a significant increase from the 2000 Census, which registered the Hispanic population at 35.3 million or 13% of the total U.S. population.
More
15 great new books by Latinos for Hispanic Heritage Month
https://www.factmonster.com/hispanic-heritage-month
Published September 23, 2019 Print